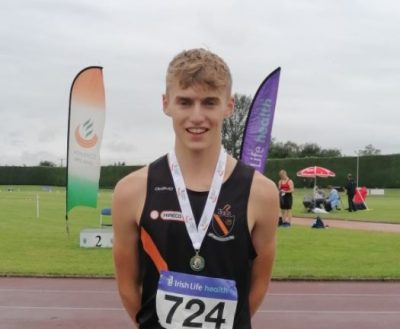 Eugenia Bateson Reports: Today saw Day 4 and the Final day of the National Juvenile Championships in Tullamore.
In a very tactical nail biting U/16 1500m Final young Sean Cronin ran the perfect race.  Sitting behind the lead group carefully positioning himself watching for any movement, this very slow race meant it was going to be a burn out finish.  At 600m Sean moved to position himself to launch his attack.  The 4 athletes appeared to have their eyes not just the podium but appeared all to be going for the Gold.  At the bell there was a move but this only managed to break to 10m away.  Sean read a mature race, didn’t panic and made a strong move at 300 to go.    While he took the 2nd position at this stage, he didn’t manage to shake off the other two athletes.  On the final bend despite looking like me might get boxed in, he cleverly pushed out nicely to control the sprint finish.  All lads fought hard but Sean had his magical final surge to convincingly take his First National Track title in the 1500m in a time of 4.23.17, a race of skill and tactics rather than PB’s and time.

Under 15 Boys saw Matei Urasachi take to the track for his 1500m Final.  Another strong performer, Matei worked his way up through the field with 300m to go.  A group of three broke away at the bell and despite working hard and closing down the gap on this occasion Matei finished a strong 4th in a time of 4.29.96
U18 Girls 400m heat saw Amy Sheehy make her debut in this event.  Amy had an excellent start and strong positioning.   Coming around the final bend in 3rd position with strength in her stride, she finished in 4th literally on the line but in a time qualifying her for the Final in the afternoon.  Amy showed another strong start in the final making pace in the first 150m and finishing 7th in a time of 1.03.76.  Well done Amy on your debut, an excellent starting point in making a National Final first time out.  No doubt one to watch.
U17 Boys 1500m Final was a fast-paced race dominated by a City of Derry athlete who pushed the pace finishing in 4.01 which pushed the race into a furious chase for the pack.  JD Kelly pushed well within this pack holding his own until the last 200m.  On this occasion he was unfortunate despite his strong run to be pushed down to 7th place.  His massive effort didn’t pay off today but no doubt JD will be looking forward to his cross-country season.
Last Track event of the day saw Niall Carbery in the U19 1500m.  In a field of 14 and a messy first two laps Niall was forced to run wide to try to make up ground to get back into the lead group. At 500m to go the group split and at 300m there was just too much ground to be made up.  A disappointing end to what was a brilliant track season for Niall.
And so ends the 2021 Track and Field Juvenile Championships.  Well done to all those who competed in Dublin’s and to those who progressed to Nationals in this the strangest of years.  Rest up – Cross Country is up next!!