On a dull, gloomy day and with what could only be described as ideal XC conditions, the Leinster School’s Provincial XC Finals were held in a relatively dry Santry Demesne.  These races saw the culmination of a hard winter’s training for most athletes and the standard in which they competed so well was extremely high.  In total, today’s campaign on the country saw a terrific number of 11 athletes qualify individualy with the number surpassing 20 of athletes who qualified as a result of team efforts.  Needless to say there were steep hills, awkward bends and soft underfoot conditions, all of which have become expected in the running of these events.

First out of the starting pens were the Minor Girls, Clonliffe having only two representitives in this category, Amy Warren and Caitlin Butler.  Amy battled valiantly to secure a prestigious place in the All-Ireland School’s XC coming home fighting in a great 12th place.  Caitlin, who is ever improving in training had a particularly strong finish to place 34th.

On then to the Minor Boys race where again there was but one Clonliffe representative, Cillín Forrester.  Cillín had a strong race finishing in 60th in a huge field with over 140 athletes racing.

Lauren Carr, who admits to not being “a lover of XC”  displayed a wonderful burst of talent in the Junior Girls race, finishing in a very commendable 8th position for the 2500m distance.

Running the distance of 1500m, the Junior Boys toed the line in style.  In a thrilling battle Craig Giles’s hard work in copious amounts of trainings paid off indeed as he bagged 4th place, with Stephen Cashin running extremely well to place 12th, Daniel Lacey chasing him down in haste landing himself in 13th position.  Encouraging runs too from Mark Keirns 71st Aaron Cullen, Ian McEweeny and Jack Horan, Jack fighting his way home to finish in 77th position.  Due unfortunately to stomach cramps,  Cian Bolger was forced to withdraw from racing.

Next on the event schedule, the Intermediate Girls race of 3500m saw Alannah  Cooley stride home for another qualifying position in 13th, being the only Harrier in this race yielded a good result on the club front.

In the Intermediate Boys race Leinster’s very best athletes didnt fail to display in the slightest.  First Clonliffe member home was Sean Carrigg in a strong 12th, Alex Hogan as a first year Intermediate pacing close behind, placing a great 21st.  Next in promptly behind was Sean “GAA” O’Leary fighting for team qualification points, placing a fine 22nd.  Joseph Hession put in a powerful team effort adding only a mere 27 points (27th) to St. Aidan’s scoring four securing team silver and a place for eight runners in th All-Irelands. Kevin Mc Kenna battled for a good 34th  in the black and white of Belvedere Kevin Loftus was next in, in an admirable 39th place.  Fintan Mc Manus was forced to retire from the race. 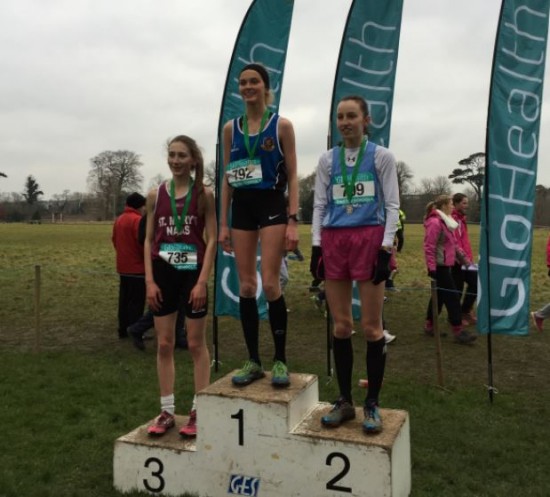 The Senior Girls race was of utmost importance form a Clonliffe aspect, the distance of 2500m proving to be somewhat of a sprint to reigning Inter County All-Ireland Champion Hope Saunders.  Hope ran simply superbly, awarding herself with the title of Leinster School’s Senior Girls XC Champion.    Laura Tuite had a brilliant run too, securing yet another place in the All-Ireland Finals, finishing in 10th.  Lizzie Murray in one of her first school’s races showed great form to come home in 24th position, displaying good promise for the upcoming Track and Field season.

The last event of the day, after the course being teared to shreds, was the Senior Boys race of 6000m.  With a high calibre in the field this was quite tough from many aspects; and a long distance not to be underestimated.  Cathal Doyle showed his full recovery from illness cruising into  brilliant 5th place with Brian Flanagan tight on his heels in a super 6th place followed closely by Adam O’Brien in a terrific 11th given his recent return from injury.  Alex Gibbons had a very encouraging race to finish 22nd with Niall Norman a fighting 31st. Paul Courtney ran very well, arriving in 52nd; with good runs too from Gregg Hossenny and Ross Kearney, 52nd and 60th respectively. The st. Aidans team of Cathal, Brian, Adam and Alex took Leinster gold and will look with confidence to next month`s All Irelands. 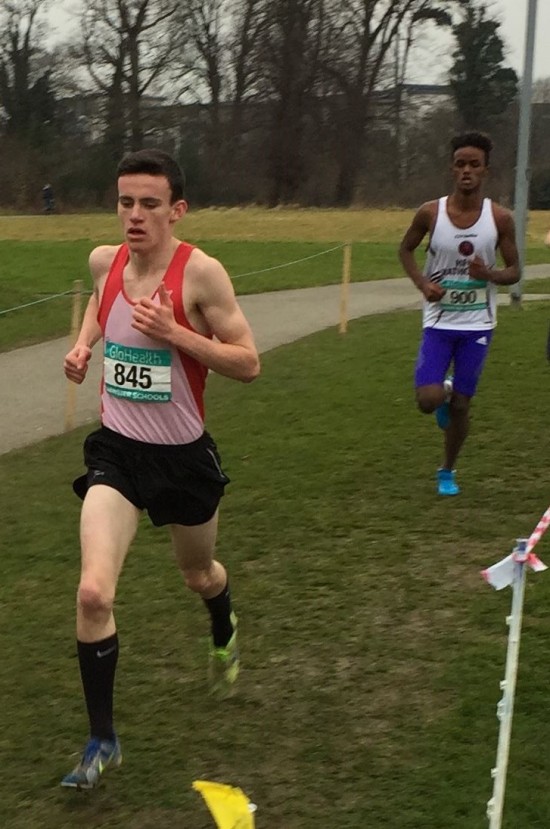 So that concludes the day’s racing, well done on the tremendous effort of all who participated as well as those who were not so fortunate to qualify.  When willing to put in the hard training, the rewards reaped are enormous in satisfaction.

A special thank you to the wonderful cooperation, organisation, generosity and kindness of Alan O’Neill and of all in the Clonliffe community who assisted in the smooth running of the events today, it would be impossible to hold such an event without the much needed support.

These results are PROVISIONAL and are INTERNAL, official results on Athletics Ireland.

Report, results and photos  written and compiled by K Loftus