Shane Rooney reports: Following on from the success of last year’s Dublin Remembers 1916 5K Athletics Ireland, in partnership with Dublin City Council, hosted the Streets of Dublin race on Sunday 21st May 2017. Clonliffe Harriers ladies were successfully represented in this 5k race which took the participants through the streets of Dublin starting outside the CHQ Building and finishing on City Quay. 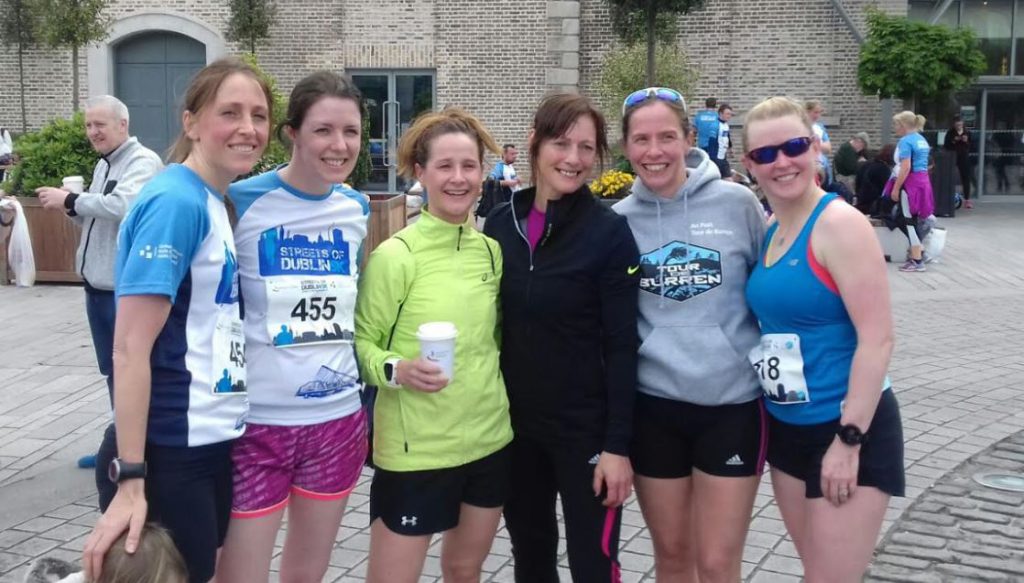 Siobhan Devaney was the 3rd lady home in a very impressive time of 20:04 and she was quickly followed by team pacer Ciara Peelo in a time of 20:20 (4th lady home), next home and 5th lady overall was Aideen  “Whoop Whoop” Brady in a time of 20:22. Congratulations also to Anne “the Legend” Lyons (finish time 22:57), Paula Horgan (finish time 24:37) and Caroline Hynes (finish time 24:25).
In other news, an unnamed source alleges that Aideen Brady may have ran faster had she not attempted to pat the potential new Taoiseach (Leo Varadkar) on the butt as she ran past him shouting “up ya boy ya Leo”!!!.

Also a shout out to the 20 or so Harriers who assisted the Dublin Race Series organisers in trialling the new Half Marathon route. All agreed it’s a course where negative splits can be achieved as the first half of the course is a challenging up hill section but time can be made up during the downhill & flat second half. Run the race smartly and you’ll come home happy.
Congratulations to all who ran over the weekend and of course more questions have been raised, including ;
Will Emma Cooper beat her new Half Marathon PB?
Will Jason Blake ever get the reporter to shut up?
Will Aideen Brady become the new assistant to the Minister for Sport?
Until next time, keep digging in and run safely.