Club Vice Captain Conor McGuinness Reports: With several changes to the Mens Senior Track and Field Team throughout the week,  Clonliffe finished in 7th position out of 10 teams from across Europe. This was only 10 points off 4th position in the overall team standings.

We arrived late in Lisbon airport on Friday night where Eoin Pierce met us in the terminal having arrived earlier from London. Experience triggered Joe to do a head count, where it was discovered that Mark McDonald had gone wandering off in pursuit of coffee and wifi. The Captain was “not interested”. However, on our second attempt we made our way to the bus for the 1hr 30mins journey to the city of Leiria. Upon arrival at the accommodation around midnight, Ian Rogers was onsite in advance and had prepared all of the athletes race numbers etc. With an early start to events on Saturday morning, most of the team were down at breakfast before 7am, with everyone kitted out in the new luminous orange Clonliffe t-shirts. These were much of the talk of the weekend, allowing the Captain to keep track of various messer’s from afar.

Upon arriving at the stadium there was no sign of the thunderstorm which has been forecasted, instead we were greeted with sunshine and a superb view of the Castle of Leiria. First on the track was Timmy Crowe who finished 3rd in the 400m hurdles, having hit a hurdle in his warm up beforehand. The race was won by Paul Byrne who was representing Birchfield Harriers. Mark McDonald battled well over 800m – his first of 3 races on Saturday to finish 8th. Meanwhile Marcin Klinskow and Luke Mangan were competing off campus in the Shot and Discuss events respectively. Marcin placed 9th and Luke 8th. Also competing outside the stadium was Simon Galligan who perormed well with two 55m throws in the Hammer to take 4th place. David Flynn, having flown back from California the day before,  lead out the 3000m s/c looking smooth throughout and made a move with 3 laps to go where he took the win comfortably. Ian Rogers placed 6th in the Pole Vault with changing cross wind conditions in the stadium proving challenging.  Junior athlete, Keith Marks looked good in his first jump of the day – getting several roars from the Clonliffe crowd – where he went on to record a new personal best of 7.48m to finish 2nd. With this excellent form he will be eyeing up the world junior standard of 7.60m in the coming weeks. Keith Pike ran the 100m finishing in 3rd place in a time of 10.97. Then, less than 2 hrs after his 800m race, Mark Mc Donald was in the blocks for the 400m, where he finished 4th in 51.91. Next up was Antonio Garcia where he finished 3rd in the 110m hurdles in a time of 15.02. 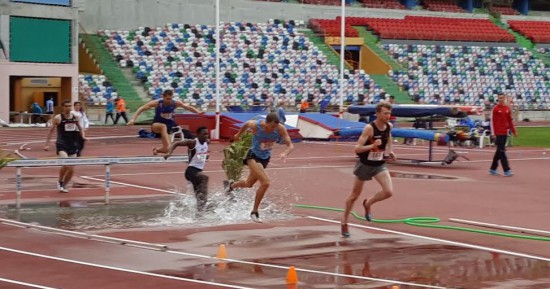 With a break from events in the afternoon, the organisers of the programme set up a Les Mills Fitness Workout on the home straight of the track. Chris Sibanda and David Flynn quickly taking up the opportunity to display some dance moves for the crowd! After his dancing, Chris Sibanda ran a pb of 21.55 to finish 4th in a strong 200m field. (Fellow Harriers take note!). Next up was Eoin Pierce who raced well in the 1500m, however, didn’t have the speed over the last lap having just returned from injury to finished 7th. Over at the High Jump, Andrew Heaney placed 6th in 1.94m as he looks to come back into form.  Aaron Hanlon dropped down to the 5000m after his recent 10000m performance where he took up the lead for the first half of the race, then  finishing in 4th in a time of 14.37. Rory Gunning was happy with his performance, throwing a pb of  62.36m to take 4th in the Javelin. Next up was Junior Adam O Brien who ran well in the 3000m, where there was a mix of sunshine and showers in his race. Adam finished 5th with a new personal best of 8.51 to take home. More to come from him this season. In the latter stages of the programme, the 4 X 100m (made up of Pierce Friel, Chris Sibanda, Stuart Roche and Keith Pike) had their first run of the season together finishing 4th in a time of 42.64. Finally, the mens 4X400m event required distance eventers Mark McDonald, Eoin Pierce, Josh Stubbs and David Flynn. All eager to clock a fast time for bragging rights! With heavy legs from earlier events during the day, they finished 6th in a time of 3.34. 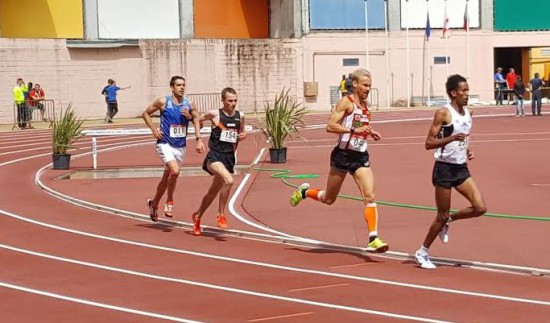 After the event the general consensus was that 4th place was certainly in our grasp. However, with a number of personal bests recorded and some notable performances, there is certainly evidence of excellent future prospects in this league. As we left the stadium, attention turned to the Champions League Final, as we made our way into the main square in Leiria and cheered on Athletico Madrid (under strict instruction from Antonio Garcia and his father).
Well done to all.
Conor McGuinness