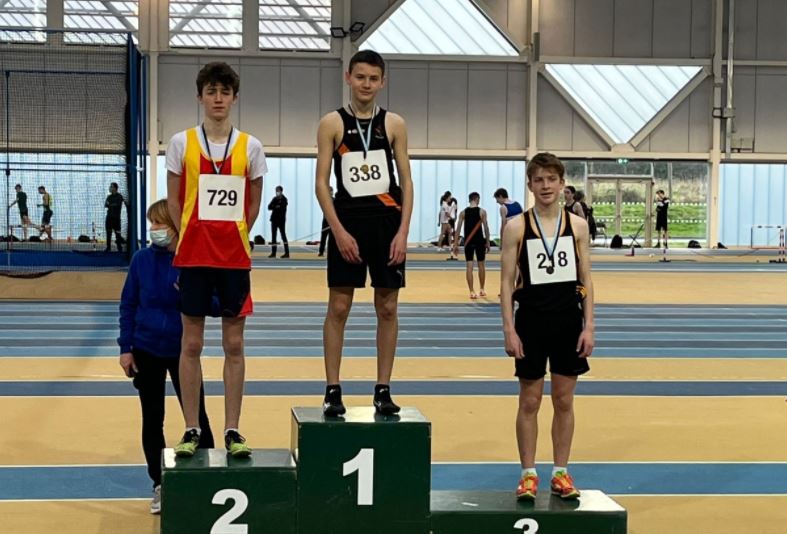 Eugenia Bateson Reports: In 2019 our Juvenile Athletes competed in Abbottstown at the Dublin Indoor Championships just before the world went into lock-down.  Two years on, finally the doors are open, the start guns are ready the the joy at being back was palpable.   Let’s a face it, there was some unfinished business out there with athletes having to park so many events, celebrations and achievements over the past two years.  Our resilient athletes, two years older (some no wiser!!) were back and donned the clean spikes and the black and amber vests during the 2 day event for the U15 to U19’s.  Some great running by the Juveniles with some highlights below (too many to mention!)

Saturday fielded the 200m.  U16 Girls saw Ava Usanova, Kate Campbell, Emily Jachna and Sarah McDonnell take to the 7 heats for that coveted place in the final.  Cut-throat was the theme with the 8 final places going to the fastest times.  Sarah McDonnell despite running an impressive heat and finishing 2nd  narrowly missed out on time.    Ava Usanova took the U16 Dublin Indoor Championship 200m title.  In the U16 Boys Jaydon Carroll despite not feeling fully recovered from a recent sick leave rest took the Bronze in the U16 Boys.  This was a photo finish for 2nd and 3rd with Jaydon receiving Bronze and qualification to the National Indoor Finals.
The 800m saw many of our U15 girls taking on the challenge with Aedin Ferguson just missing out on the final.  The finals were decided on with the winner from each of the 7 heats plus 7 fastest on times.  Aedin was 8th fastest but plenty to come from her.  U16 Girls saw  Cadlah Nic Fhlionn and Rebecca Walsh through to the final.  Cadhla won her heat but her legs felt it in the final.  Rebecca running back to her true form finishing 4th and unfortunate as this years National Qualifiers are top 3 going through.    No doubt Rebecca will get the head down and focus on the outdoor track season ahead.Debutante Christopher Lynch ran a very impressive 800m in the U17 boys race taking 3rd place and through to the Nationals.  Not a bad start to an athletics career taking home some championship hardware.  Likewise Nadejda Melega had her first race running very well in her 200m.

Sunday – 60m and 1500m. U19 400m sprinter James McDonald opened the day for Clonliffe and finished 2nd in his heat getting through to the final where he finished 6th in a time of 52.6.
U16 girls saw Rebecca Walsh back on the track in what was a race lead out by a break away pack very early on.  Rebecca, ever the pro focused on her own race and form and finished 8th in 5.34.26.  Mya O’Reilly who has shone through in Cross Country did her first 1500m indoor finishing 8th in a time of 6.00.35.  A very positive learning experience for Mya who is, like Rebecca showing great promise.
U16 Boys 1500m saw Cathal O’Reilly and Matei Usarachi take to the track.  Matei dominated from the start.  A powerful performance from him.  Just prior to the bell he surged away from the group winning in a time of 4.29.09 approximately 60m ahead of the 2nd place finisher.  Cathal O’Neill finished 10th in a time of 5.18.26 in what was a very strong race for him.  Matei had broken up the race from the start.  Cathal kept his focus and ran very well, and finding his confidence put in a strong finish picking up some places in this field of 14.  His 10th place finish was convincing and will no doubt give him the confidence in races ahead.
U17 Girls 1500 up next with Hazel Kenny.  Hazel ran exceptionally well also.  She was slightly unfortunate to have got boxed in with a small group breaking away from her.  Once she made her move she pushed on finishing 6th in 5.21.43.  A strong performance by Hazel and feeling good after her race, again more to come from this young lady.
U17 Boys 1500m had two Clonliffe athletes.  Lorcan Benjacar and Christopher Lynch.  Lorcan got stuck in from the off and ran a spectacular race.  His race maturity has grown and he stuck in travelling well with the lead pack throughout.  A very impressive performance from Lorcan with a Silver in a time of 4.22.52 and on to the Nationals.  Christopher had a tougher race still feeling the efforts of his 800m from the day before and finished 9th in 5.16.71.
U18 Girls – Clodagh Nic Domhnaill – A beautiful run by Clodagh as she read the race well and stuck in with the pack.  She held firm was competitive and strong. Fighting hard she finished in 5th in a time of 5:13.69 but left it all out there.  There was nothing more that could have been asked for from her.  A great raceU19 Girls was Naoise Cullen who finished 7th in 5.25.75.  U19 Boys 1500m – Ronan Donohoe ran a very comfortable race and sat nicely in from the start.  He finished 4th in a time of 4.34.89 having closed the gap on the 3rd place athlete who finished in 4.34.23.  Ronan was happy with his performance with his head still firmly in his excellent cross country form.
60m sprints – a new experience for many of the Clonliffe crew with Jake Kane and Issac Moss taking on the blocks, intense starts etc for the first time.  Nadejda Melega finished 7th in her Final U18.U16 Girls was again stacked in terms of numbers.  Emily Jachna took to the start line as nervous as a kitten but roared like a lion when the gun went off.  She finished 2nd in her heat and was unfortunate to miss the final by a mere .2 of a second!!!  Ava Usanova won her heat and the big Q  to the final and looked very comfortable as she set up her blocks.  A fantastic run by Ava lead to the judges sweating out the results on a photo finish when she was eventually awarded a Bronze and through to the National’s.