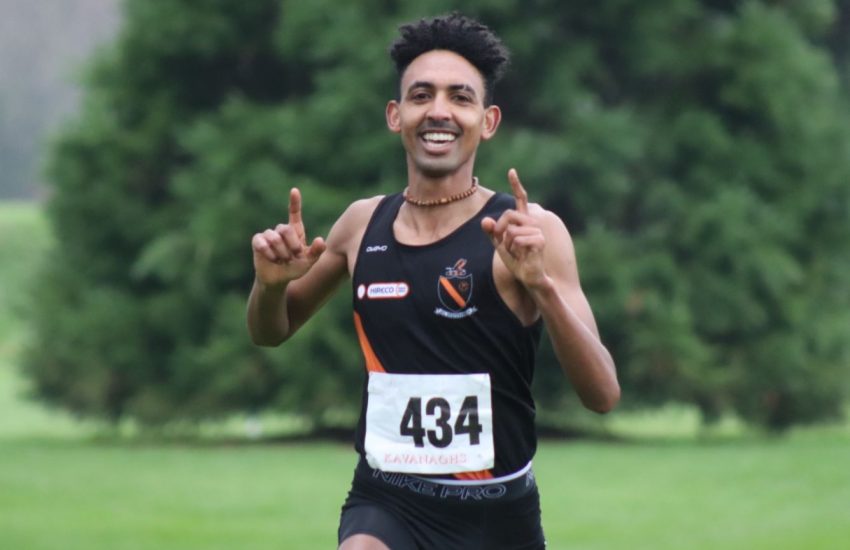 An extremely well supported Clonliffe club cross country championships took place in Santry Park this morning. There was an excellent turnout of athletes with in excess of 65 lining up for the (approximate) 5000 M distance with Efrem Gidey on his return to racing after injury winning the 2022 men’s title and Kate Hawkshaw taking the women’s, both in fairness justifying their pre-race favourite tags.

The usual suspects were on hand at 9 AM start marking out the course largely mirroring the national course but with a bit of tweaking to avoid as much as possible running close to the footpaths, Santry Park is busy on a Saturday morning and conflict with a Santry K 9 is best avoided! In advance of the 11 AM start all gathered for a briefing and for a minute’s silence for Ashling Murphy, joining with vigils being held throughout the country today.

Mr. Starter Peter McDermott set the field of almost all suitably attired in their Clonliffe colours, underway at 11.00 to encouraging shouts of ‘Come on Clonliffe!’ It was truly a magnificent sight to see so many Clonliffe vests running on our traditional cross country course down through the avenue of trees of this amazing facility, men and women, seniors juniors and masters.

As the race settled the lead trio of Sean O’Leary, Efrem Gidey and Sean Doran began opening a gap on the chasing bunch headed by Ben Guiden and Niall Carbery. With a lap to go Efrem was clear however it was Sean Doran who took up the chase, Sean having a magnificent race and finished a thoroughly deserved runner-up with Sean O’Leary some way off in third. There was an intriguing three way battle for the women’s title with Kate Hawkshaw continuing her magnificent cross country season well to the fore along with women’s captain and vice captain Jenny Johnston and Laura Tuite stuck together like glue. As the trio came into view down the finishing straight for the final time it was Kate who has struck for glory and to claim the women’s Clonliffe senior women’s cross country title, Laura Tuite was not far in arrears to take second with Jenny third.

In the battle of the juniors Niall Carbery was first followed in by Matei Ursachi and Sam Murray. In the junior women’s category it was Naoise Cullen who prevailed, second junior woman was Hazel Kenny with Lara Gallagher third (the prizes for the first three juniors will be presented on Tuesday night at training).

Jenny Johnson was the first master woman with Cathal McHale first of the master men.

Club President Paddy Marley made the presentation postevent with Efrem presented with the Harry Cooney Cup. Kate was presented with the new Clonliffe Women’s Cross Country Champion Cup and Jenny as first woman master with the Fred Connolly Cup. (At present we do not have a cup for the master men but will rectify that for next time out!)

As this was the first club cross country championship since we lost our captain Joe Cooper he was fondly remembered with the club paying a particularly nice tribute. All athletes on finishing the race received a bright orange hat replicating Joe’s famous orange hat. At any cross country event Joe could easily be located by spotting the orange hat, today in Joe’s memory we returned the favour. We are sure that Joe was looking down on his beloved Santry smiling at that. Nil desperandum.