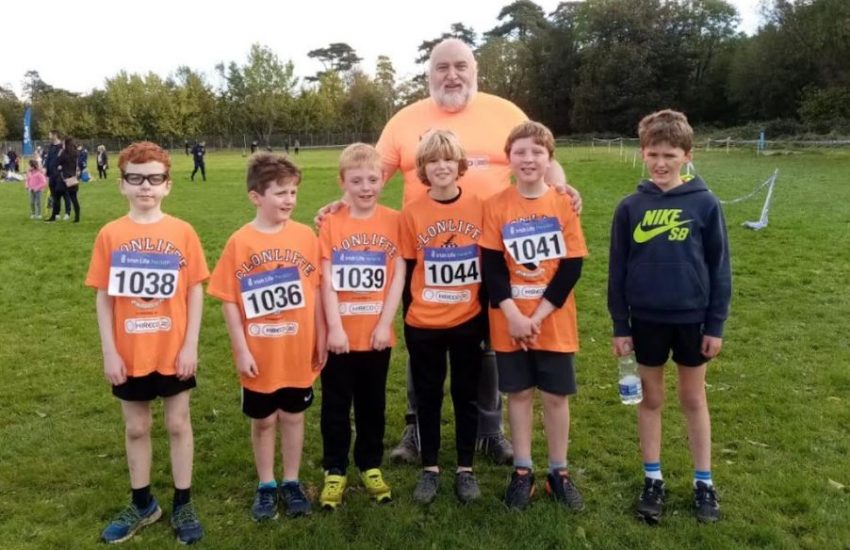 With the Under 11’s and U13’s opening the day’s events for Clonliffe, the kids were in full force digging in from the off and working their way through the course.  Bravery that will pay off as they mix with the ghosts and ghouls ahead of tonight’s the trick or treating.  Every treat well earned, the tricks were laid out on the course.  Leos Lions pushed hard setting the tone for the day with Gladys, Paul’s and Ann’s groups throwing down the gauntlet.  Passion and determination put the fear into their competitors, and it was clear, a great day’s racing was taking place with more to come in the day ahead.

U15 Girls were led home by Mya O’Reilly in 15th place with a strong performance.  Rebecca Walsh, one of the hardest working juveniles in the club, never, ever missing a training session was slightly disappointed with her 24th finish but the signs are clear – this girl has a great future of running ahead of her.  Alexandra Kelly came home next in 33rd with her consistent steady and calming presence moving up through the field, Sarah McDonnell was 4th scorer in 25th and Ava Usanova, better known for her sprinting abilities picked up a stitch early on but battled through finishing 26th.

U15 boys and the words of Thriller spring to mind: You hear a creature creeping up behind, You’re outta time, ‘Cause this is thriller,  You hear the door slam and realise, there’s nowhere  left to run. !!!!GOLD!!!!

A loaded field and Matei Usarchi did not flinch.  He ran an intelligent race after an MSB athlete broke early.  Matei held firm and waited and waited.  He made that all important decisive move in the last lap taking a very comfortable Gold.  William Walsh also showed great maturity and his previous experience served him well.  He ran a lonely race but kept his focus despite being in no mans land, kept a steady pace taking a very comfortable bronze.  Rory Quill having only returned from injury on Thursday put his troubles behind him and ran very well, putting his personal ghosts behind him coming in as 3rd scorer in 17th place.  Jake Kane who favours the sprinting ran a relaxed strong race finishing 24th and looked like he could easily have ran another lap.  Cathal Hickey finished closely behind him in 25th, followed by Jaydon Carroll, Issac Moss, Jack McDonnell, Noah Rossi, Joer Ryan, Arron Murry and Cathal O’Neill.  These young athletes, Matei under Mick Fogarty and the rest of the lads under Gerry Carr’s Guidance are building a strong future for the Clonliffe Men and will no doubt be seen in Junior and Senior Gold positions in years to come.  The groundwork is well under way and today we can celebrate their U15 Dublin Champions Title

U17 Girls took a knock to the team with two girls being unavailable at short notice.  Clodagh NicDomhnaill ran a fantastic 9th place and looked comfortable and confident throughout.  Hazel looked considerably stronger today finishing 15th with her confidence building as she worked her way through the field.  Sorcha O’Connor finished 18th and is coming back to fine form.  Kate Faherty was the hero of the day, taking a late call up to make up the team.  Her efforts were rewarded by securing the team 4th position and qualification to the National Championships.  Not all hero’s stand on the podium!!!

U17 Boys saw Mick’s lads out again, doing what they do best!  Sean Cronin despite having a few scary moments with slips and twists and out of age, led the team home to Silver.  Sean himself took the individual bronze.  Sam Murray who seems to get stronger in every race took 7th.  Lorcan Benjacar, a powerhouse, finished 11th.  Devan Morrissey was the 4th scorer in 14th, Cillian Keegan 15th and Tom Breslin taking on this distance for the 1st time took a comfortable 16th.

Well done to all who have taken part in the Dublin Cross Country Championships.  National Even Age Championships take place on 21st November in Santry Demesne – the excitement is mounting!