On a hot July 2nd night the Grand Prix Series return home to Santry for the O`Connor Cup. The race in the past has had the athletes up to their knees in mud, traditionally a winter cross country race is now firmly and popularly a Summer grass race, the only hazard to contend with tonight was hay fever!

A stunning night in Santry Demesne at the tail end of a stunning Summer`s day. The Demsne featuring wild sections of tall grass with neatly cut trails, simply superb.

They say the proof of the pudding is in the eating: maybe 12 years ago the O`Connor Cup on a bleak November Saturday afternoon would “attract” maybe half a dozen Harriers to the line, tonight 50 were on the line raring. Clearly a Summer grass race wins hands down.

Another great turn out. The mass start bring the athletes down by the rear of the stadium into the Phoenix monument turn, the field lead out by the club`s current prolific racers Tom Sherlock and Sean Doran, behind a long train of athletes, a majestic sight. After the 4 X 1 mile loops the first across the line was Tom Sherlock (20.52) . Fastest woman was Bernadette Kiernan (23.47).  In the Grand Prix Handicap the winner of the O`Connor Cup 2015 was Laura Kiernan, 2nd Brian McCann, 3rd Mick Fennell.

The Presentation was made by Club President Paddy Marley. A great job once again by the officials and Caroline for refreshments. A special thanks also to the race  sponsor, a shy anonymous gentleman. Next round no. 10 is the 1500 on July 18th. 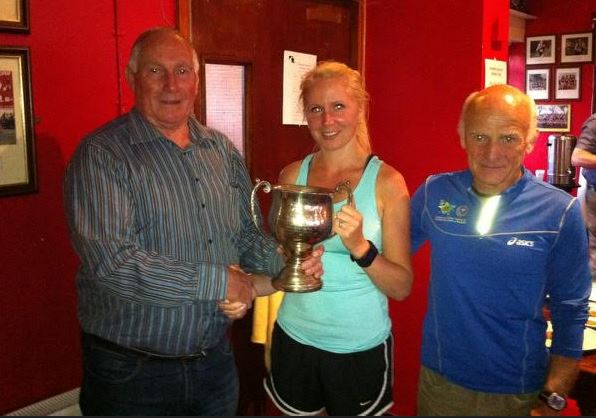