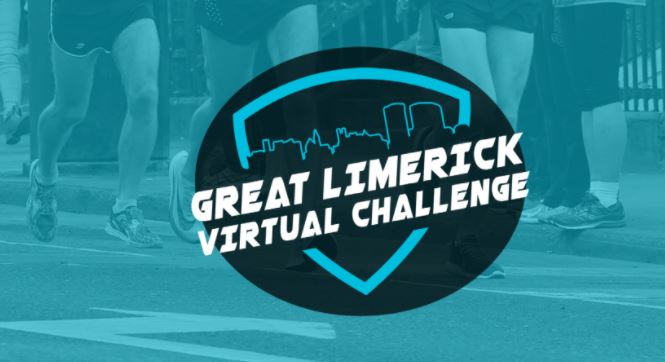 VIRTUAL 2, the sequel. LIMERICK MARATHON – Sunday 2ND May 2021 by Maurice McCrohan.
It was my second go at a Virtual marathon. I think I am starting to get the hang of it?
Having a run to train for and fundraiser to aim for helped me through the grimmest of the 3 COVID
lockdowns we have had thus far.
We built this city (marathon) on long slow runs so to speak since January. I had to adapt the 5k
circumference rule to get a range of runs from River Valley to the cusp of Malahide and ALSAA
track. I went through the stages of meeting no one to the jogger angst of pulling down my snood
when I met passers-by. Then by March, traffic increased on the roads as the public started to move
ahead of the Govt guidelines.
I am a born again stravist having moved from the luddite Casio’s to a xmas Garmin present , getting
your actual distance and time as opposed to time only run ! It is probably not good to log all the
runs on starve, but it is my new toy!
I got long run support from Ciaran McCarthy and Stephen Ryan on some of my longest runs and had
a plan for a series of pacers on the day.
I did not repeat the previous virtual mistake on the morning of loading up on food as if I was heading
off to a mass race. I had a simple bowl of muesli washed down with copious amounts of water and
barista, 2 and half hours before. I did not feel bloated and after a warm up met Noel and Dave for
the first 6 leg. We also had Shane to cheer us off!
It was a beautiful morning with Goldilocks running conditions! The route was one of my favourite
running routes. .I has been running the Swords to Baldoyle coast road for as long as I have been in
Ireland.
The next pacer was Stephen Tracy at Seabury. Stephen had run 18 on the Saturday, So what was
what turned out to another 18miles between friends?
I think Stephen is a shy ultra-runner?! Stephens’ son Tighes played Sherpa support on his scooter
carrying water and a back pack.
We were bang on just under sub 8min or for the modern sub 5min K schedule! It wanted to be on
time to meet the pacers, poor punctuality is a pet hate of mine!
Noel and Dave stayed with is to Malahide and as they dropped off , Clonliffe elite Dec Power ,who
paces sub 2.40 marathoners for fun and a mars bar (and is a great classic film buff!)Joined us for my
favourite section to Baldoyle and back.
We were well sub 5mink as we cruised along the coast road talking about the French Connection
films of the 70s! The weather as glorious and Pete Trev caught up with us in his car near
Portmarnock. Though, the main photo shoot point was almost lost as I took a pit stop at the
Portmarnock toilets!
I was well on for sub 3.30 .With 8 miles go, Dec left us at Malahide, Stephen kindly volunteered to
stay with me till I meet my final pacers in Swords Village.
The Seabury Estuary was the toughest stretch as it was windier and the surface not great that’s
when I dug in and went all Sister Maria! I simply remembered my favourite things …and then I didn’t
feel so bad!
But my punctuality was nagging at me. The final pacers were 3 of my Clonliffe oldest running friends.
(Joe, Jer, Kieran,) They do not know Swords like the back of their hands .They parked at the Valley
and were to rendezvous at the Eddie Rockets Junction.
Unfortunately, we had added a mile more en route so were 10 mines late at the Junction?
No pacers? Were they late or lost?
It turned out they headed towards he estuary to meet us but we had taken the road behind Woodies
and not the Woodies road route, so we missed each other.
Stephen had to leave me as I hit Highfield. I had not told the Clonliffe 3 where the Highfield entrance
to the Valley Park lay, and they slagged me after about this secret entrance!
So, with 3 miles to go I was on my own heading up Highfield and then. …..
The cavalry arrived in the form of a cycling Peloton led by Siobhan RV!
They had drinks for me and tucked in behind me for the rest of the run.
Then I hit the Park and got a great boost as a number of my valley friends happened to be in park at
the estimated time and were there to socially distance cheered me on!
I had to improvise the last couple of miles, running the flattest section of the Park without confusing
the cycling peloton and with confusing the supporters about where I was to finish!
I wanted to finish at the Park Run finish and with less than 1 mile go who should join me…?
Like Han Solo backing up Luke on the death star attack..,, yes Stephen Treacy came back to join me
for the last mile!
The Clonliffe 3 were also entering the park the long way round but could not reach us in time!
I finished at the right spot at 3.27, well under target so was delighted and emotional at the support
at the end. Sinead had a coffee from the Barista box and my medal for photos.
It was great to have a socially distanced catch up with some friends after, finishing with a coffee on
the grass by the Barista box, where Kieran’s soya milk order caused a delay?
I was grateful for all those who supported me on the day. No job was too small! We were more
overwhelmed by the donations to the St Francis Hospice fundraiser for Noeleen.
A couple of weeks and I will be back and starting training for an actual autumn marathon!
Maurice “mo” McCrohan