Last night was a perfect night for a track race. The late summer/autumnal sunshine was replaced by a mild twilight evening as the club 10,000m championship for the Bonass Trophy was held under lights in the Morton Stadium. The club 10,000 is incorporated into the Clonliffe Grand Prix Series and drew another big field. There were in excess of  30 starters, a very good turnout for the daunting 25 lapper.

Declan Power was the victor and crowned 2014 Club 10,000m Champion for probably the third or fourth time in recent years as he recorded an impressive time of 33.07. Some way in arrears was 2nd place finisher Ernie Ramsey in 34.54 with the ever improving Sean Doran 3rd (35.06). The Clonliffe ladies 10,000m champion was Rachel Wisdom recording a time of 39.72 with Sinead Duffy 2nd in 44.22.

In the Grand Prix Sinead Duffy was the athlete to beat the handicapper and take maximum points from 2nd place Robert Beckett and 3rd Conor Jennings.

An impressive strike rate saw 29 of the 34 starters finish. Pride of place went to Donore`s Jim McNamara who set a new Irish Masters O/75 record of 44.58.2.

Thanks to the race sponsor Pat Bonass, sponsoring this race on the night for the 29th year, Caroline Tuite (yet again) for post race refreshments and to the hard working race officials (a tough gig!) 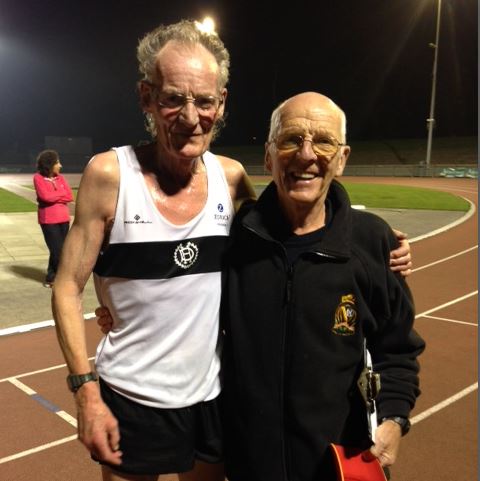 The next round of the Grand Prix series is also a club championship – the 50th anniversary of the Clonliffe 10 Mile Championship for the Ahern Cup which will take place at 12 noon in Malahide Castle on Saturday October 4th. With a number of the leaders missing last night`s race there are major changes in the race for yellow Richard Case now leads on 290, chased hard by Tom Sherlock 283. The 10 Mile will no doubt shake things up even more.