Shane Rooney Reports on Fingal 10k July 23rd (apologies for delay in posting): “There are only two forces in the world, the sword and the spirt. In the long run the sword will always be conquered by the spirit.” Napoleon Bonaparte

One could feel spirits were high on a mixture of adrenaline and excitement as over 40 members from Clonliffe Harries, along with over 3000 others athletes, readied themselves to conquer the first race of the 2017 Race Series. Before the start a special mention was giving to the inaugural Clonolympics, an event which will become the envy of many rival clubs.

For some club members it was the first time to run as part of Clonliffe Harriers, for others it was an opportunity to wear the black & amber singlet with pride.   The morning started a little damp, but quickly cleared to result in a warm morning, which made conditions a little difficult and heavy. The course itself is often underestimated as it has many challenging sections, including the incline through the village, the heavy going along the dual-carriageway and the humid conditions through the north county Dublin countryside.  However, none of these challenges stopped the Clonliffers from showing that the spirit is mightier than the Sword(s), with many achieving PBs.

First home for Clonliffe was David Brady in a time of 35:51 and he was quickly followed by Conor Keane and Matt McGuinness. There was a tight race between Anto “New Boy” Doran and Dermot “Fresh Prince” Faughnan who were the 4th and 5th Clonliffers home. Anto, having utilized Dermot’s height for shelter, came across the line 2 secs ahead in a PB time of 37:33.  Stephen Tracey continues to smash his own times, achieving a new PB in a time of 39:12. Both Stephen “Foodie” Doyle and Alex Eustace ran amazing races, pacing themselves perfectly from the start and picking up the speed to the finish, both achieved PBs with times of 40:16 and 41:09 respectively. What was especially great was seeing Alex regaining full mobility after the Limerick marathon.

Declan “Don’t Stop Me Now” Grant charged home in a new 10K PB time of 41:55 and he was closely followed by the Clonliffe Wolf pack of Aisling Andrews (new PB), Shane Rooney, Emma Cooper, Mick Gleeson, Colm Leonard, Alan Curley and Maura Matthew, all finishing within seconds of each other and proving the team who work together finish strong together with no one being left behind.

Laura “Huggie” Kernan shaved 5 seconds of her previous best time by storming up the hill in 42:55,

Melissa Curran, proving that she’s getting stronger, clocked a new PB time of 47:12.

Joanne “Healing Hands” McCabe cruised home in a time of 50:24. 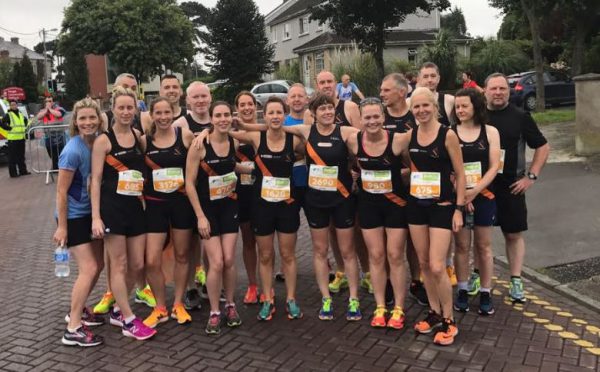 A special shout out to Orla “Smiler” Deighan, who completed her first 10k in a time of 49:19 and to the newest member of the crew, Philp Richards, who marched home in a time of 52:34.

Of course, as with every race, questions are left to be answered;